Watkins got his start as a photographer of commercial real estate. His photographs of Yosemite were enormously impressive when seen on the East coast, prompting the creation of Yosemite as a National Park and motivating Eastern painters such as Bierstadt to seek out a then-little-known Californian.  Creating the sublime view was Watkins’s signature technique:  "implying scale by placing dramatic objects — trees, rocks – in the foreground of his pictures, objects that would print darker than the massive mountains or other landscape elements in the background."
In discussing the origins of the Watkins monograph, Green mentioned collector and digital archivist Steve Heselton who launched careletonwatkins.org, an indispensible online repository with JPEGs of nearly all of Watkins’ known stereoviews. It has certainly been indespensable for our Processed Views project.

Perhaps in part because he was mostly unaware of dominant Eastern art-making trend Watkins was uninterested in the dewy, often treacly fantasia that suffused 19th-century American painting. Instead, Watkins showed the landscape as it was: Grand and beautiful, but also as a resource that was tapped. Watkins didn’t just show us beautiful views from high places, he showed the land being consumed by prospectors, being blown up and blown through by the railroads, and he showed the natural landscape being replaced by San Francisco and by the sort of massive farms that first made southern California famous. He showed the lumber mills that decimated the Western forests and the mines that tunneled underneath the mountains and the smelters that broke down the found ore. He showed how the wealthiest Westerners, Watkins’s mates in San Francisco’s famed Bohemian Club, lived on their country estates.
Watkins established the Western landscape, the real Western landscape and not the manifest-destiny-driven (or Humboldtian) fantasy of it, as the grand American thing, as the subject with which American art would have to grapple. Watkins’s insistence on showing the land as it was — not just its beauty but also the land as it was used, even defiled by extraction-driven industries such as timber, mining and agriculture — pointed the way toward truth in American art. It was Watkins who pioneered the American realism that gave rise to the crusading honesty of Lewis Hine, Ben Shahn and Dorothea Lange, that led to the more nuanced revelations of the New Topographics photographers and the deadpan forwardness of Ed Ruscha. [Image: Watkins, Cape Horn near Celilo, Columbia River, Oregon, 1867. Collection of the Metropolitan Museum of Art.]

Additional discussion about Watkins' and photographer Robert Adams' love of trees can be found at http://blogs.artinfo.com/modernartnotes/2011/12/for-the-love-of-trees-watkins-and-adams/

Posted by Notebook - Natural History at 9:12 AM No comments:

Print the Legend of the Western Landscape 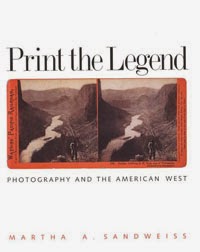 In Processed Views, we draw attention to America's changing landscape brought about by industrial farming and food production. We choose to highlight and be guided by the work of 19th c. photographer, Carleton Watkins, photographer of both Yosemite Valley and the mining, lumber and railroad industries.

A peripheral conversation arising from our 19th century mimicry is the evolving nature of all of American landscape photography. In her history of western landscape photography, Print The Legend, Martha Sandweiss illuminates the way photography both stops time, exists in time and it's ability to create myth, legend and identity.

"During the nineteenth century, photographers and photographic publisher worked hard to transform their intrinsically fragmentary images of the western landscape into complex visual narratives, relying on printed captions and the elaborate sequencing of serial views to created stories of temporal change. But wrenched from these original publications contexts, nineteenth century western photographs are indeed ill-suited to speaking to "progressions" of the "relations between things." They necessarily represent a kind of discontinuous history in which neither the shape nor the cause of change is easily discerned and if they cannot mimic the flow of history, neither can they easily mimic the shape of popular literature, for change is a hallmark of popular literary representations of the nineteenth-century West. The wilderness is subdued, the deserts bloom, heroes grow in moral stature, and more modest narratives of self-improvement play out again and again across the frontier. Photographs can serve such narratives of change and can, indeed , evoke deep-felt memories of such cultural myths. But particularly when wrenched from their original publication contexts, they can rarely depict or explain such change themselves; products of history , they cannot always serve history well. They resemble what Pierre Nora calls Ilieux de memoire, sites of memory: "moments of history torn away from the movement of history, then returned; no longer quite life, not yet death, like shells on the shore when the sea of living memory has receded." Artifacts of the past, they can still evoke the past, but always in negotiated and contingent ways.

When we read nineteenth-century photographs in history, when we try to reinsert them into the rich economic and cultural world of their production we can indeed learn much about the world from which they come. But, of course, we cannot truly do so without also reading the photograph through history and approaching them with questions and concerns of our own. Photographs are stable objects, but they have unstable meaning. If the meaning and messages of nineteenth-century photographs are constantly shifting and being invented anew, despite all the seeming specificity of their subject matter, the pictures nonetheless remain remarkably rich and useful to all those who would study the national past. For ultimately, their greatest value lies not in the physical information they convey—about the appearance of a place, the shape of an object, the sense, photographs stop time, but they remain paradoxically dynamic artifacts.” p. 342 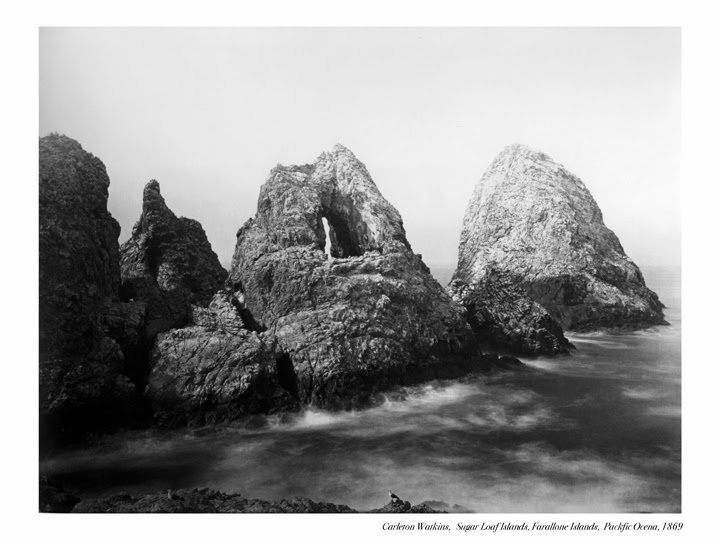 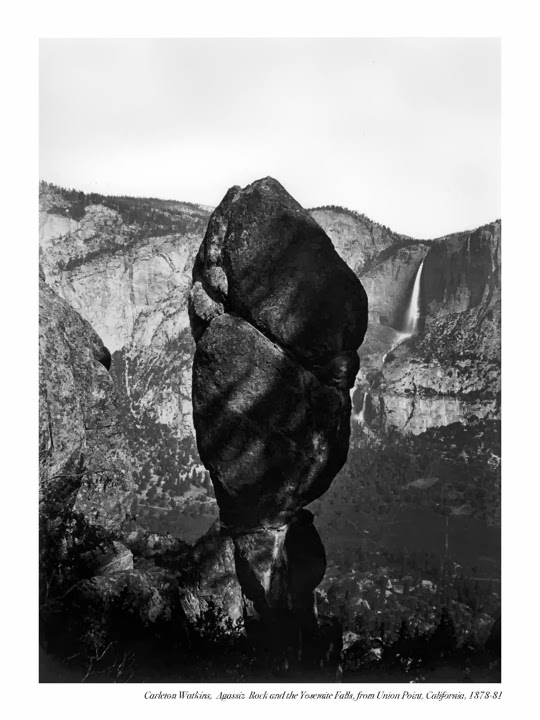 Posted by Notebook - Natural History at 5:45 PM No comments:

The Meat Racket and In Meat We Trust

The finale photograph of Processed Views is looming --  inspired, in part, by two recent investigations of the meat production and packing industry.
Investigative reporter, Christopher Leonard, delivers an account of  the evolution of the nations's meat supply over the past thirty years. In The Meat Racket, Leonard covers how meat production conglomerates have created a system that puts farmers on the edge of bankruptcy, charges high prices to consumers, and returns the industry to the shape it had in the 1900s before the meat monopolists were broken up. Numerous interviews have revealed the extend to the political power of this industry that is contributing to the demise of  America's family farm culture. 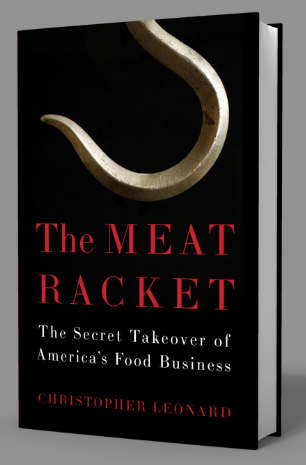 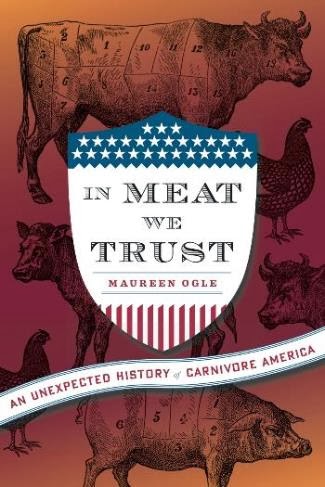 Maureen Ogle provides  historical perspective to this industry in her book “In Meat We Trust.”  Tracing the history, she profiles the technological developments, as well as personalities that built the industry. She lay much blame, on the American consumer who remains uninformed about the process and consequences of their diet. The "meat problem is really one of culture, of politics and, above all, of identity." 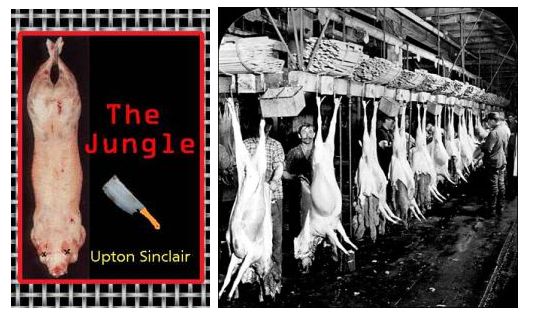 It is about time, Upton Sinclair would be gratified.
Posted by Notebook - Natural History at 10:27 AM No comments: