Carleton Watkins: The Stanford Albums, an exhibition featuring more than 80 original mammoth prints from three unique albums of Watkins’s work: Photographs of the Yosemite Valley (1861 and 1865–66), Photographs of the Pacific Coast (1862–76), and Photographs of the Columbia River and Oregon (1867 and 1870). The exhibition will be on view April 23 through August 17, 2014. Also featured will be cartographic visualizations developed in collaboration with Stanford’s Center for Spatial and Textual Analysis and the Bill Lane Center for the American West, which provide dynamic context for the geography and natural history of Watkins’s photographs.
The exhibition is accompanied by a  mammoth volume of the same title published by Stanford University Press. It includes all 156 images from the albums—a definitive collection of Watkins’s highest achievements—and 17 essays by Stanford-affiliated contributors. 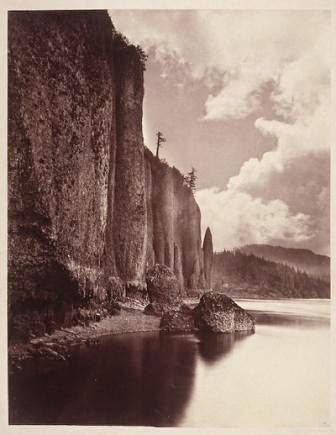 Posted by Notebook - Natural History at 10:11 AM