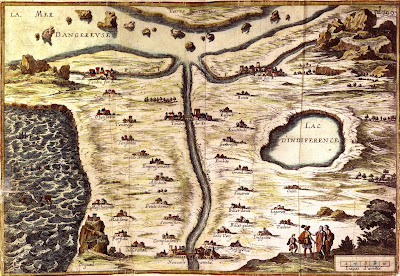 Consuming Passion is a journey through time and emotional space traversing the changing terrain of nurture. We became conscious of the trek as we scaled the pinnacles of our breasts, through the swamplands of osterized fruits and vegetables, around lunch boxes and snacks, now muddling through a vast plain dotted by meals on the fly and holiday rituals. Along the nurture road the landscape of the kitchen, our bodies and the emotional landscape of loving, procuring, offering and growth observed is in constant flux.

Annette Messanger's work led us to the 18th century novelist and essayist of Mlle. Madeline de Scudery (1607-1701), who devised the Carte de Tendre (Land of Tender Friendships) where initiates to her literary salon traveled through emotion terrain toward de Scudery's affection. According to feminist historian, Gloria Feman Orenstein, women throughout history honored the absolute commitment of their friendships and viewed the literary salon as sacred space, matriarchal utopia and psychic self-portraiture.

The map of Tendre is a topographic allegory, representing the stations of love as if they were real paths and places. The country is bisected by the Inclination (Disposition), a river that runs south to north, joined by two smaller rivers, the Estime (Respect) and the Reconnaissance (Gratitude), before plunging ito La Mer Dangereus (The Dangerous Sea), which is separated from a reef-ridden narrows from Terres Inconnues (Unknown Lands). To the west are the decidedly choppy waters of the Mer d'Intimitie (Sea of Enmity).... -- Frank Jacobs

Posted by Notebook - Natural History at 8:26 AM