We were thrilled to be interviewed by freelance writer and curator, Pete Brook
posted on Prison Photography.org
30 June 2014

HISTORY, NATURE AND LANDSCAPE PHOTOGRAPHY
Today, June 30th, marks the 150th anniversary of The Yosemite Grant, signed by Abraham Lincoln, putting the protection of Yosemite Valley into the hands of the state of California with ‘the express conditions that the premises shall be held for public use, resort, and recreation, for all of time. The grant was a precursor to land-use-law that later led to the establishment of the National Parks.
There can be no photographer better known for the early exploration of the American West as Carleton Watkins (1829-1916). Nor is there a mid-to-late 19th century photographer (Ansel Adams did his bit later!) who shaped public opinion about natural spaces as much as Watkins.
What would Watkins say about the RVs that roll into Yosemite and Yellowstone each year? What would Watkins say about the monoculture agribusiness that dominates large swathes of the United States’ land? What would Watkins make of the ubiquity of corn syrup in our diets?
“The series Processed Views interprets the frontier of industrial food production, the seductive and alarming intersection of nature and technology,” write Lindsay Lochman & Barbara Ciurej in their artist statement. As we move further away from the natural sources of our food, we head into uncharted territory replete with unintended consequences for the environment and for our health.”
Processed Views is a witty and painstakingly constructed project that gets at some serious issues. What were Lochman and Ciurej thinking? Exactly how did they piece together these distopic dioramas that drip with E-numbers?
see our photographs, Watkins' inspirations and find out why   click  Q&A 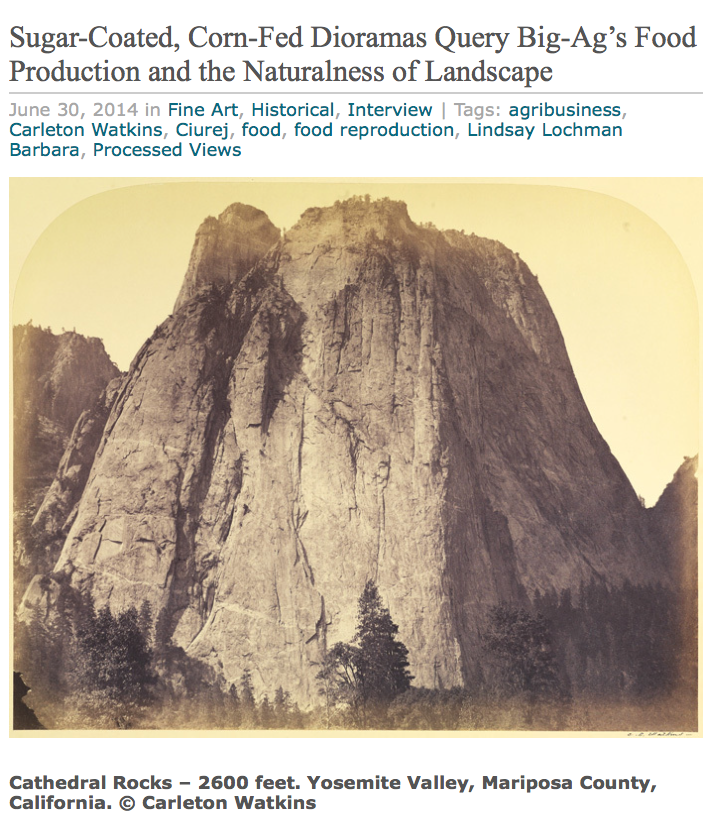