Writer Charlotte Woolf has intereviewed Barbara for a feature in the Filter Photo Festival's Blog - IMAGE 37.  They discussed our exhibition, Ponder Food as Love at the Ralph Arnold Fine Arts Annex at Loyola University, Chicago.
Thanks, Charlotte and Filter Fest! 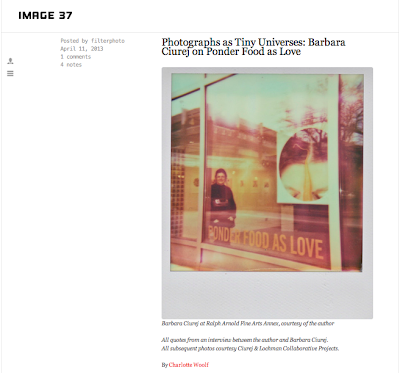 All quotes from an interview between the author and Barbara Ciurej.
All subsequent photos courtesy Ciurej & Lochman Collaborative Projects.
By Charlotte Woolf
Photographers Barbara Ciurej and Lindsey Lochman, together known as Ciurej & Lochman Collaborative Projects, have been working together since the 1980s. Their most recent project, Ponder Food as Love, is exhibiting through April 13th at the Ralph Arnold Fine Arts Annex of Loyola University. The project began during Ciurej and Lochman’s two-week residency at Ragdale in 2010.
Our studio happened to be next to the kitchen, and because we didn’t have to prepare this food, both of us were suddenly like, ‘there is so much that goes into [the prepation].’ It is so much more than the food…that makes people feel nurtured and convivial – and what’s going on is this exchange. … At the time, we were also reading Michael Pollan’s The Omnivore’s Dilemma and he asks this questions that I remember as, how is it that the alchemies of photosynthesis transform into the pleasures and delights of culture?

Quickly, the project became about more than just food and the body: “It became the huge, ineffable topic of what is love, being nourished emotionally and physically – the nature of nurturing.” The human body’s innate need for sustenance can provoke raw, powerful emotions. Across different cultures, the need for nourishment intersects with the natural desire for interpersonal human relationships.
Another choice that was informed by historical influences was the combining of round and square canvas shapes. After taking a step back from their work, Ciurej and Lochman realized that:
The tondos looked like petri dishes, microscopes, and universes. The tondo was the form you’d see in the Renaissance with the Holy Family. … The form itself has a long artistic historical tradition, but was kind of abandoned because it was too domestic. Still, it was always meant to encapsulate a universe. So I started looking at each photo as a micro and macrocosm…

For inspiration, the duo also researched botanical illustration and still life prints. Regarding the square images:
They felt like little stages, the way we constructed the scenes in them. This is what sometimes happens in your work when you get away from the emotions that fueled it. You see it in a more cosmic mode.
I watched this video called The Overview Effect about the astronauts who peered out the windows for the first time and saw this blue earth floating in space. All of them had a cognitive shift about how things were connected. What was interesting in the video…they were describing what some people would describe as a religious experience but they said it so scientifically – it was all connected under this thin layer of clouds and it created a sense of awe. They felt so small yet privileged to be on the earth: a simultaneous long view and compression of micro and macrocosms. So I had this with my work. I began to see the works as universes.
After getting feedback on the series, Ciurej and Lochman found that each still life of the body adorned with fruit had countless cultural associations. The two also noted that some people were uncomfortable with certain images in the exhibition.
A lot of these have a darker side to them, where you’re feeling used up or suffocated by it, or penetrated by it, or totally immersed. The bodies are showing a little bit of wear – it’s the price of all of this, of our humanity, deeply tied with our mortality.
Each image acts as a microcosmic representation of the human experience of food. Which is exactly what Ciurej and Lochman set out to accomplish.
Ponder Food as Love is on view at the Ralph Arnold Fine Arts Annex at Loyola University through this Saturday, April 13th. The gallery is open to members of the Loyola community daily from 8 am - 10 pm, and to members of the general public on Saturday from 12 pm - 4 pm.
Posted by filterphoto
April 11, 2013
1 comments
4 notes

Posted by Notebook - Natural History at 11:41 AM