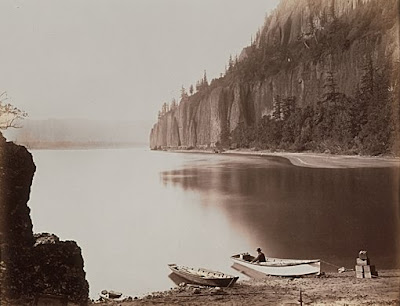 Watkins came to California's gold rush with his boyhood friend Collis P. Huntington, who later gained fame as one of the "Big Four" of the Central Pacific Railroad. While neither succeeded in the gold fields, Huntington found success in the railroad and supplied Watkins with occasional employment and never ending free transportation. Huntington Died in 1900.  His last job was photographing home of Phoebe Apperson Hearst, esteemed philanthropist and mother of Wm. Randolph. Watkins could not complete the job due to failing eyesight. He then retired to his small ranch in Yolo County, deeded to him by Huntington's Southern Pacific Railroad for past services. But he never recovered from the shock of losing his life's works, and in 1910 he was moved to Napa State Hospital for the insane, where he died at the age of 87.
Posted by Notebook - Natural History at 3:36 PM